Dirty Dog Saloon is Hamilton’s sexiest bar. The Dirty Dog Saloon is where ladies rule and boys drool. Be part of the dog pound Friday and Saturday night at 41 Catherine Street downtown Hamilton. We’ve got the best new and classic rock, t-shirt giveaways, a big bad mechanical bull, monthly theme parties and poles n’ pods for the ladies to swing n’ do their thing. Visit dirtydogsaloon.ca for ...

- Dirty Dog Saloon is 19+
- The DJ's are playing best in country, rock and the greatest in retro

Looking for a place to hold your stag & doe?
Send an email to one of the addresses on the "info" board and ask them about the amazing rates. You can also call 905-527-7488 for direct answers to any questions. 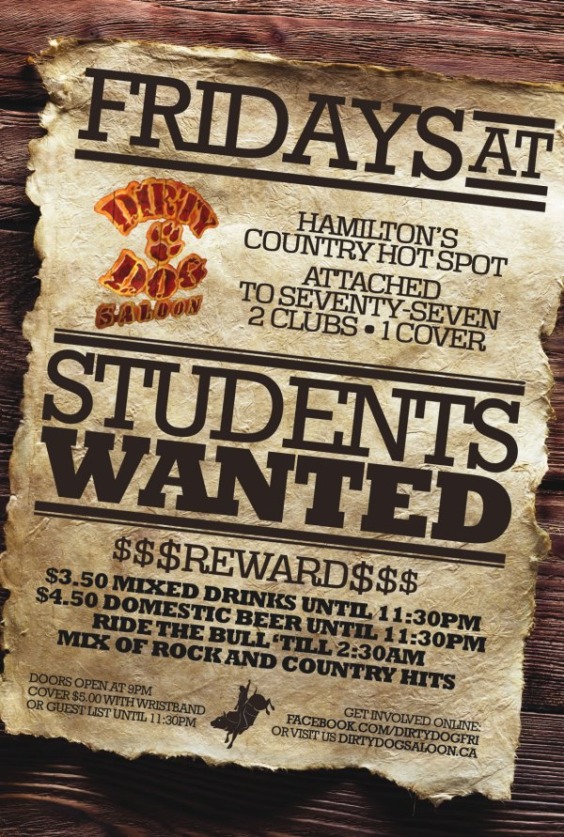 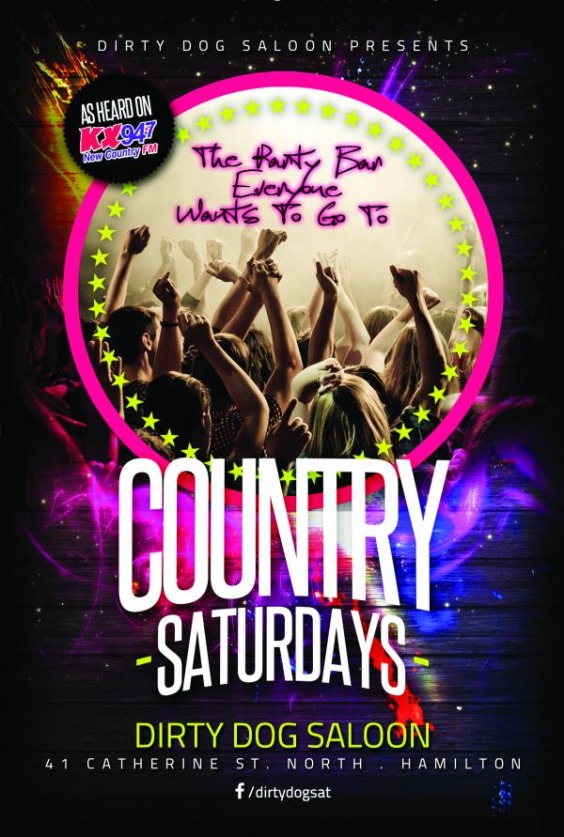 submitted by Shannon for Dirty Dog Saloon Nightclub on March 4, 2018

Our friends were on guest list and we tried to get in but apparently they have a rule that you can’t get in if you’re not allllll together, even if you guys are 2 minutes apart and 2 people apart in line. Didn’t know that even after being a regular, the security guard kept touching me and pushing me and i told him not to but he kept using forceful action after asking him to stop touching me because i asked if it was club policy or if it was all clubs because i’ve never heard of that before. I pushed him away so he’d stop touching me then he went to the other girl security guard and i got kicked out of the bar for “a long time”. Nice to see they treat their regulars like that.

submitted by Omar for Dirty Dog Saloon Nightclub on March 20, 2016

My buddy and i went back home for a bit, then came to meet the rest of the people in the club later.

He wasn't even drunk, but some white bald security guard kept insisting he was too drunk too come back in.
I was with him the entire time and honestly, all we had was like two beers.

When we got to the entrance, we tried to explain to him. Funny that he didn't say anything to me, but only my friend
Who was from iran.

We left, but honestly, this is unbelievable.

Please please save yourself and go somewhere better!!

Honestly one of the worst bars i've been to in a few years!! The door guys and security guys are incredibly rude and grumpy. We were on a list for a birthday which we were told when we arrived was "just a fancy way of getting us to spend money". if you're looking for some gross greasy people then this is the bar for you. The music is way too loud you can't even hear the people beside you. Talking to anybody is honestly impossible. The drinks are a tiny bit cheaper yes, which is the only reason i gave it a star, but if you want to have some real fun there are so many other better bars in hamilton!! The machanical bull they rave about was working for about 30mins then we were told to stay away from that area and "we should be at the bar". I will never try this one again. The bar attached was club 77, a little nicer but omg a ghost bar...Completely empty except for the people they made stand outside so it looked a little bit busy! Haha what a nightmare....Time to close the doors for good guys.

submitted by Chrissy for Dirty Dog Saloon Nightclub on May 29, 2015

My friends and i decided to have a night out, we are in our late 30's and country girls to our core.. We both have professional careers and in my opinion have our life on the right track. We came to dirty dogs to have a night out in the city and dance the night away.. We made a trip to the washroom and my friend took a little longer in the stall and because of that she was questioned lol.. The "security" guard came in on a power trip.. Trust me this was a power trip!! We both are emt trained and see a lot in our day to day routines. 3 men came to the door and questioned us. My experience with this bar was horrible, too bad because word of mouth is the best form of promoting an establishment. 5 thumbs down dirty dogs!!

Not Worth My Time or Yours

I went here with a bunch of my friends (mixed guys and girls) and as much as i love country music i will not go back here again. To start off they refused to give me a glass of tap water say that they could not do it forcing me to buy a $3 bottle of water. Secondly, they have a few dancing poles in the bar and jokingly with my friends i started dancing on one which i was forcefully taken down from and told guys were not allowed to dance on them (i was respectful to security, i did not kick anyone off, and nobody danced on it the whole night after). I talked to the manager and he told me it was to reduce fights because he wouldn't want a guys butt in his face. However, talking to him more he agreed with me that it was sexist and that he personally wanted the "sluts on the bar and poles" because guys are only coming to his bar "to score some p*ssy" and that he likes sneaking a peak at the panties which brings profit to his family. He also said that he wouldn't want all guys up there on the bar dancing because it wouldn't bring him money (i guess gay bars bring no profit then?). All in all, this bar is managed by at least one sexist pig and if a group of gay guys went to try and dance at his bar i wouldn't be surprised if they got kicked out.

Door man was on a power trip. He was ignorant when we walked up. Went with a group of 17 girls, i went outside for a smoke after being there only an hour and he wouldn't let me back in. Don't waste your time, head to the falls where they want you to have a good time.

submitted by pauline for Dirty Dog Saloon Nightclub on October 21, 2013

This place was awesome! I went there with 12 of my friends, we called ahead and let them know, they were totally accommodating we had the vip lounge upstairs our host kyle was great!!!! And totally sexy! Can't wait to go back!